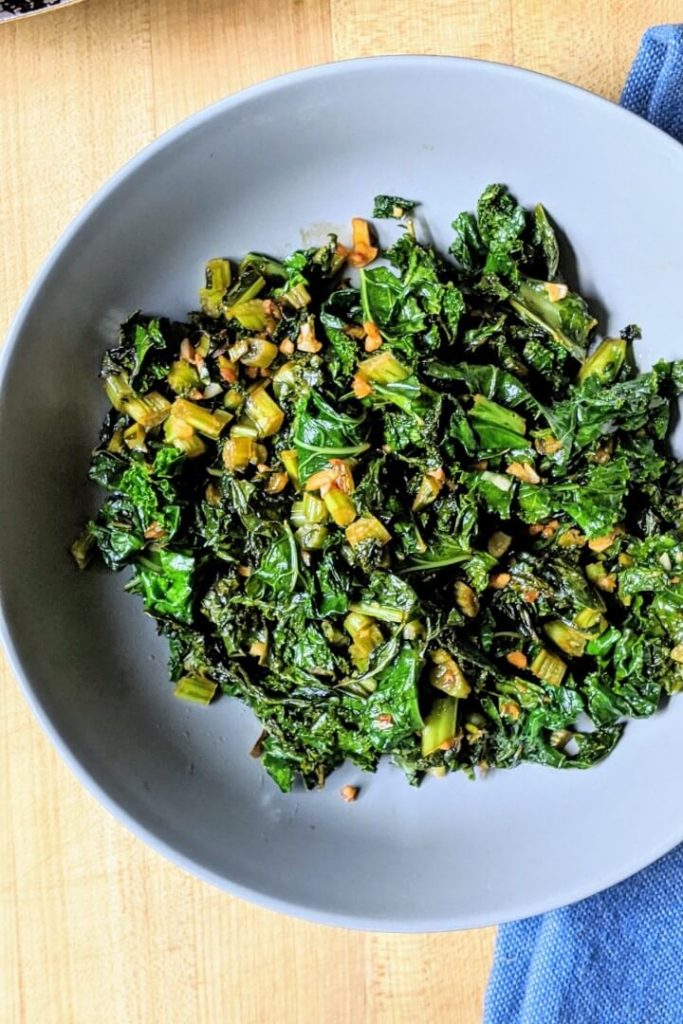 Some links in this post may be affiliate links, meaning we earn a commission on any purchases you make using the link at no cost to you.

Approximately 80% of kale recipes use the leaves only.

And when I say approximately, that means it is a complete guess.

I hate tossing out kale stems. So, when I use kale leaves only for a recipe, I typically put the stems back in my fridge to hopefully use later in the week. Unfortunately, they may always get used up.

So, what to do with those under-appreciated kale stems?

Cook them with the leaves. This will avoid the potential of losing them in the darkness of your refrigerator crisper drawer.

And the easiest and quickest way to cook a bunch of kale including those stems?

In a hot pan like this quick sauteed kale with garlic and sesame recipe.

Health Benefits of this Sauteed Kale

Kale is a popular “superfood” for its dense nutritional value. According to the Mayo Clinic, kale is packed with vitamins A, K, B6 and C, calcium, potassium, copper and manganese. In fact, it has more vitamin C than any other green. Studies have even shown that it may decrease some forms of cancer.

How Long Does this Sauteed Kale Keep?

This sauteed kale will keep for 3-4 days covered in the refrigerator.

How to Make Sauteed Kale With Garlic

How to Make Sauteed Kale: Video

How to Make Sauteed Kale: Steps

Heat olive oil in a pan over medium heat. Add kale stems and cook, tossing a few times throughout, until tender and starting to crisp, about 3 minutes.

Add kale leaves to pan a handful at a time. Cook until wilted, about 2 minutes.

Add sesame oil, vinegar, soy/tamari mixture and garlic to pan. Cook until kale leaves are soft and tender, about 3 minutes. 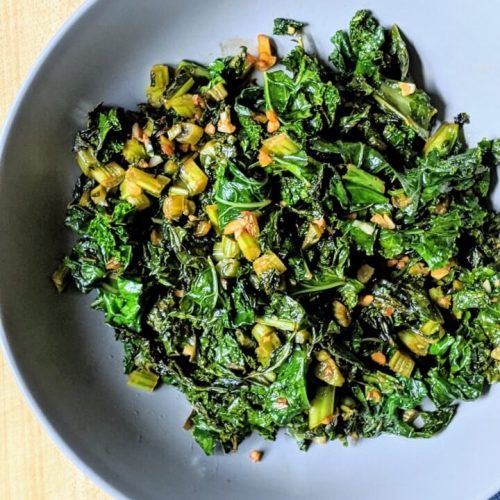 Don’t Toss Out Those Kale Stems

Finally, a reason to keep those kale stems. Now you’re one step closer to becoming a zero waste household. Not to mention a pro at cooking veggies.

You probably noticed that just a few extra and simple steps (adding sesame oil, vinegar, tamari, and garlic) is all it takes to turn a healthy packed veggie into a delicious tasting one.

Let’s be honest, kale on its own probably isn’t topping the list of most exciting foods. But, with these extra tweaks and knowledge, you just transformed it into a super satisfying dish like a pro.